How can Charles Manson get married in prison?

By Connor Adams Sheets for "The Irish Examiner"
November 28, 2014 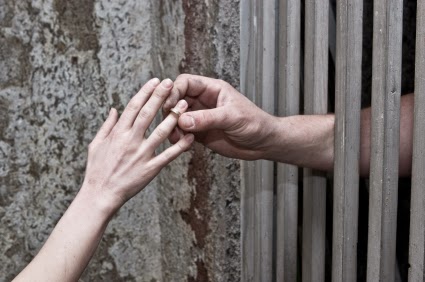 The revelation that Charles Manson is to wed Afton Burton has raised questions about prison marriages, conjugal visits, and the weird world of love behind bars, writes Connor Adams Sheets

The Kings County, California, marriage licence was issued to the couple on November 7. They have 90 days to get married and are expected to wed at the prison next month.

While many non-violent prisoners are not allowed basic freedoms like ease of movement, a varied wardrobe or access to certain books, one of the most reviled criminals in American history is being allowed to exchange vows with a young follower while in the clink.

The current legal framework surrounding prison marriages has roots in a number of US Supreme Court decisions. The court found in the 1978 case Zablocki V Redhail that inmates have a constitutional right to marry in prison, and that rules impinging on that right violate the 14th Amendment’s Equal Protection Clause.

The Supreme Court built on Zablocki in a 1987 decision, Turner V Safley, finding that a Missouri regulation requiring prisoners to get their prison superintendents’ permission to get married violated their constitutional rights. As such, there is very little legal recourse the California prison system can turn to if it were to attempt to stop Manson from taking a wife.

But it can bar prisoners from consummating a marriage, as it appears will be the case for Manson, because prisoners serving life without parole do not get “family visits”, also known as conjugal visits.

The Manson marriage would not be the first instance of serial killers getting hitched while behind bars. The so-called Hillside Stranglers, Kenneth Bianchi and Angelo Buono, both got married while serving prison sentences for the killing of 10 girls in California during the 1970s, according to ABC News. So did “Night Stalker” Richard Ramirez while he was on death row in California for murder in 1985.

In other words, no matter how strange, wrong or rare it may seem to a layperson, lockup marriage isn’t unheard of to people familiar with the prison system. But it still often requires someone who is serving time for committing a crime to convince a pen pal, acquaintance or other sympathetic person to take the plunge, or manipulate them into thinking they are in love. Manson fits that profile, as he was famous for forming a “family” of people who killed for him and carried out his criminal desires.

Psychologist Elaine Aron, the author of The Highly Sensitive Person in Love, told ABC that “[m]any people in jail are sociopaths and they’re very good at manipulating people”. The New York Times found in 1995 that 544 New York State prison inmates married that year, out of 68,000 total in the system.

Reverend Starlene Joyner Burns provides tips on how to get married to prisoners on a section of her website called “Weddings Behind Bars”.

“Think creatively and let your imagination run wild until you find something that both of you shared and enjoyed together that can be symbolised through words, song, body language, or touch,” she wrote.

“Get your partner to participate in this creative process. Just because he/she is in lock down does not mean that he/she has to be disconnected.”

But Burton and Manson might want to tamp back any expectations of a gala affair. They will only be allowed 10 guests as well as an officiant to preside over the wedding, and it will be held on a set monthly date most likely in a visiting room. “It’s not very spectacular,” Rev Edwin Muller, who has officiated weddings at New York’s Eastern Correctional facility, told The Atlantic of prison marriages. “I don’t recall flowers.”

That lack of romance could impact a couples’ marriage, according to the US department of health and human services. “Married men in prison reach the national 50% divorce rate much more quickly than do men in the general population,” it wrote in a report on incarceration and families.

Despite these sobering statistics, Burns believes a prison wedding can be a fulfilling opportunity for two people who love one another. “So ladies, don’t go out and buy the most revealing dress you can find, because bare skin must be covered,” Burns advises. “You cannot bring a bouquet, music, cake, gifts (other than the ring), or camera.

“Costume jewelry will set off the alarm, as well as, clothes with metal beads and high heel shoes with nails. You can still be beautiful without the glitter and exposed skin.”

I have a guess why Manson might want to marry Burton, it's a personal reason and probably incorrect so I'm not going to post it.

I would guess it will be news if they actually do get married, I think marriage records are public, I guess the record of the marriage license was public. I think I read Burton said the wedding would be on the first or second Saturday of December.

The cops might say Manson violated some rule and throw him in solitary just to prevent the marriage, the cops do that sort of thing in prison everyday just to mess with inmates. I seen it with my own eyes.

They only allow marriages for one specific day each month.

I'm interested to find out who the 10 allowed guests will be.

Will Bug get invited?

Tom I deleted your comment. I'm sick and tired of your anti-American comments.

And if you keep making them, I'll delete you from the blog. Heil!

Amen to that katie

I am feeling moved to get the lucky couple a wedding gift. I'm thinking cutlery.

The marriage isn't really interesting to me.
Peoples reaction to it is though...

Like I said before.....
Because it's Manson marrying...a new rule concerning Cal. inmate marriages will soon be on the books.

Because it's Manson marrying...a new rule concerning Cal. inmate marriages will soon be on the books[end quote]

Probably right.
I still say it was because Charlie hated Nixon that the California and the US Supreme Courts overthrew the death penalty in 1972.

When Nixon said publically that Manson was most likely guilty this enflamed the radical Left which had infiltrated our judicial system at the time. Charlie was a radical's hero and there stood Nixon who was hated by the radical Left. So when Charlie got the death penalty this pissed off the Radicals who perceived this as Nixon killing Charlie so the radical appeals courts of the day simply threw out what they perceived as "Nixon's verdict".
That was a smart move by Charlie to hold up the newspaper in court saying "Nixon Declares Manson Guilty". The Radicals on the California Supreme Court were not going to let Nixon kill one of their own.

I'm curious about if this changes Star's legal status as a visitor. Do wives have improved access compared ot visitors?

It should definitely alter her status with regards to Manson estate were she to outlive him.