Rosemary's Baby Re-Boot begins on Sunday. But Devil's Due isn't even out on DVD yet?

A couple of months ago, the news came out that NBC is working on a Rosemary's Baby miniseries set in Paris. Then NBC announced that they've found their Rosemary: Zoe Saldana. It's an interesting move for Saldana, a film actress who has been in a few huge movies (namely Avatar and the two latest Star Trek films) — though she often finds herself in smaller, supporting roles, which this part definitely is not. Time will tell whether she'll be more of a Mia Farrow or Don Draper Rosemary?

Then in January another movie came out which came and went before you can say Mia Farrow: 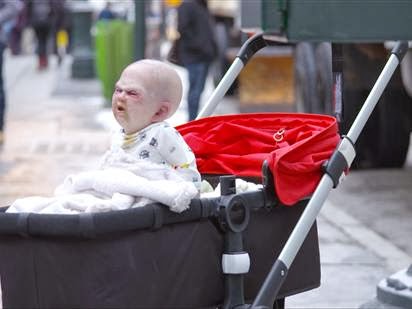 In case you haven't seen it... Today Show Segment shows the mechanical devil baby terrorizing the streets of New York City.  No word yet on whether or not they tried to pull their prank outside of The Dakota...

Despite the marketeers best efforts, the movie only grossed $8.5 million on its opening weekend, not enough even to equal Rosemary LaBianca's mythical estate in today's dollars...But now the new miniseries is imminent...click here.  And Devil's Due isn't even available on DVD yet.  SO, the question is:  Is the Son of The Devil going to sell, or sell out?
Posted by starship at 11:28 AM

Thanks for the update Starship! I didn't know you were into scary stuff.

I don't know if this miniseries will be any good. I didn't think the movie was that great.

The film The Devils Due can be streamed in decent quality--->HERE.