NBC adds AQUARIUS to its lineup, but no word on when.... 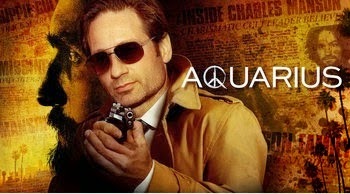 It's 1967 and the era of free love, drug experimentation and Vietnam is in full effect. When the teenage daughter of a respected lawyer goes missing, LA Police Sergeant Sam Hodiak (David Duchovny, "Californication," "The X-Files") starts asking around. He soon discovers that the hippie kids he's questioning don't take kindly to cops, especially one with hair as short as his. Needing the help of someone they trust, he partners with rebellious undercover cop Brian Shafe, a man who's more comfortable rolling a joint than patrolling a beat. It's not long before they stumble upon a small-time cult leader seeking out vulnerable women to join his cause. From there, they follow this man's trail down a rabbit hole of drugs, sex, murder and cultural revolution. Little could they know, however, the guy they're hunting will eventually become the killer we now recognize as Charles Manson. He was a lost soul who desperately wanted to get into the music scene of the '60s until something snapped. This is the show that will explore the cat-and-mouse game between him and the police, which will go on for several seasons ultimately ending with the infamous Tate-LaBianca murders.

One-hour drama "Aquarius" -- David Duchovny returns to network television as a Los Angeles police sergeant trying to catch Charles Manson in 1967.
Posted by starship at 10:22 AM

NBC's last shot at fame ended in 1998 with the last episode of Seinfeld.

I'm hoping the Aquarius show is good at least.

I re-did this post in order to make it more germane to our topic at hand....

the gottamn germans got nuttin to do with this

You're a riot, Alice!

Anyway.....I'm looking forward to this show, I hope it's a good one!

A while back someone mentioned a documentary about Krenwinkel called "Life After Manson". I haven't been able to find it online yet, however, I ran across a vid of the woman director talking about it--->
HERE.

I ran across a Yahoo "news" story where a person claims his dead father was the Zodiac killer. I suspect the news story is really just an advertisement to sell books as Yahoo calls ads "news" often.

A number of other people have made similar claims. Apparently, the police have DNA and fingerprints from the Zodiac, so comparison to potential suspects should be pretty straightforward.

Dennis Kaufman has been caught in countless lies. He also says his father was the Texarkana Moonlight Killer, the killer of Jon Benet Ramsey, the Michigan Child Murders and many others. He's considered a laughing stock by many. If he told me the sky was blue I'd double check.....

I never liked that movie much either Katie. Seems, some people do think that "Rosemary's Baby" is good, but I'm certainly not one of them.

My bad Sunset. I should have read the article before I wrote my previous post.
So, the guy's biological father resembles the Stine composite? He must be the Zodiac. If we could go back in time I'd challenge anyone to walk down a busy street and NOT see anyone who resembled that composite. I remember back in 1969 most men had short hair and most men who wore glasses wore similar frames.
I'd bet money that this guy is just trying to get on the Zodiac money making band wagon.....

I liked Rosemary's Baby. It was pretty over the top for it's time. What people find scary has changed over time. I remember seeing The Exorcist when I was a teenager. I slept with the lights on for about week. I rented it one Halloween to watch with my teenage daughter and she thought it was lame. The same with the original Halloween movie. I saw it when I was about 16 and it scared the hell out of me but my daughters didn't even think it was scary at all.....

Yes, apparently the only connection between Earl Van Best Jr. and the Zodiac is he resembled a composite sketch.

The police said they have investigated 2,500 suspects and they get about 1 a week new ones.

I watched a very long and boring documentary about the Zodiac last night. They interviewed many of the police and 2 of the surviving victims involved.

My knowledge of that case is rudimentary at this time. My personal belief so far is there are 4 attacks that are most likely to connected to the Zodiac. The first 3 involve a boy and a girl "making out" in a lovers lane or beside a lake. In the first attack, he used a .22 caliber fire arm. In the second a 9 mm "Lugar". In the third, he had a gun, but didn't use it, he stabbed the couple after they were tied up. In the fourth, he shot a solitary cab driver.

Michael Renault Mageau and Bryan Calvin Hartnell both survived the attacks while their girlfriends were killed. They can be seen in the boring documentary-->HERE.

One of the police talks about the "mask" the killer wore and says it's unusual for a killer to wear a mask as he's going to kill the people and there's no need to hide his identity. In that attack, my opinion is Zodiac was not wearing a "mask" but a "hood" similar to an executioners, I'm guessing to the purpose of striking fear into his victims.

is it down again? Happens every few years

Mark's site went down when TOTLB when down. I hope it comes back up. Good stuff on there.

Who's Mark and what's the address for his website?

charliemanson.com is run by Mark Turner.

Lynyrd posted this message elsewhere, but I'll post it again here. According to the new TV Guide the show starts filming next month.