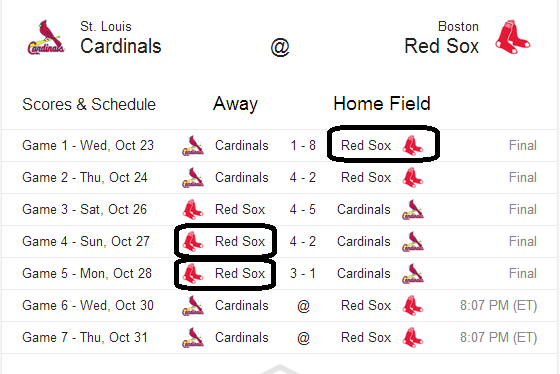 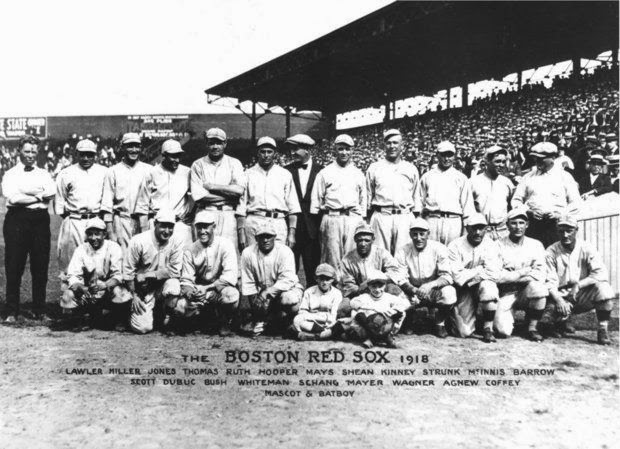 This is the 1918 team photo of the Boston Red Sox. The 1918 Sox, which included Babe Ruth, was the last team to clinch the World Series in Fenway Park on Sept. 11, 1918. (Associated Press Photo courtesy of National Baseball Hall of Fame Library, Cooperstown, N.Y.)

BOSTON - Imagine a mere turnout of 15,238 for a World Series game at Fenway Park.

Imagine an entire Boston Red Sox roster without even one bearded player.

Imagine all that, and you might get some idea of how it was when the Red Sox last clinched a World Series in their home park by beating the Chicago Cubs 2-1 in Game 6.

They can do it again on Wednesday night as John Lackey squares off against St. Louis Cardinals wunderkind Michael Wacha in Game 6.

Now, as they seek to clinch on their own hallowed home ground, they stir distant memories of Carl Mays and Babe Ruth – Red Sox stars who all too soon would become members of the New York Yankees. Mays and Ruth had a lot to do with the Sox winning the 1918 World Series in a season shortened by U.S. involvement in World War I.

Mays, a 26-year-old right-hander with a “submarine” pitching motion, went 21-13 as the workhorse of a Red Sox depleted roster – as it was throughout baseball because of the wartime conditions. Mays pitched 293 innings that season, then went 2-0 in the World Series.

Ruth, who was transitioning from left-handed starting pitcher to left-handed power hitter, still made 19 starts and won 13 games for the pennant-winning Sox. Although "The Babe" was more interested in hitting at that time, Sox manager Ed Barrow still used him only as a pitcher in the World Series. He went 2-0, including a sparkling 1-0 victory over Hippo Vaughn in Game 1 at Chicago’s Comiskey Park.

In the 1918 Fenway finale, Mays lured the Cubs into 16 ground-ball outs. He also helped himself by picking two runners off first base.

The Sox got the decisive runs in the third inning. They scored when Cubs right fielder Max Flack dropped a line drive with two outs and runners on second and third.

Mays went on to a three-hitter, not allowing a base hit after Tyler’s infield single in the sixth.

The final out of the last World Series clincher at Fenway was recorded by first baseman Stuffy McInnis, who took a throw from second baseman Dave Shean on a ground ball by Cubs left fielder Les Mann.

McInnis, catcher Amos Strunk and pitcher "Bullet" Joe Bush had come to the Sox in an off-season deal with the Philadelphia Athletics.

Mann? Like Tyler, he played for the “Miracle Braves” of 1914. Mann went right to the big leagues after being a football-baseball star at Springfield College.

With their victory in 1918, the Red Sox won their fifth World Series in five tries.

And now, they are back in their own backyard, 95 years later, looking to win another Game 6. 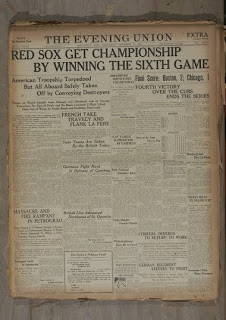 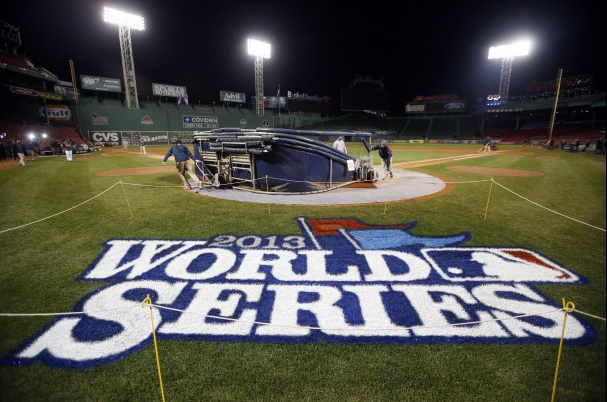 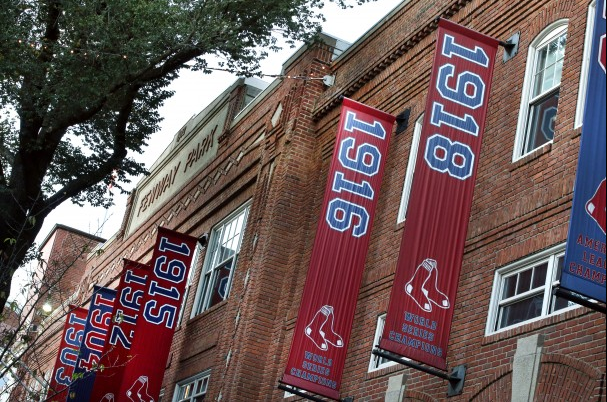 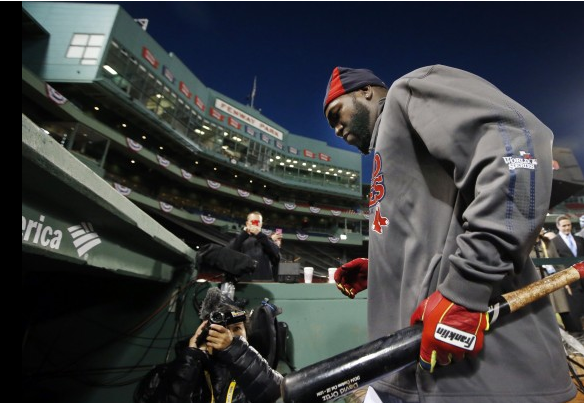 By Associated Press, Updated: Tuesday, October 29, 8:05 PM
BOSTON — Generations of New Englanders are preparing. Practically no one alive can remember seeing such an event unfold: The Boston Red Sox could win a World Series title on the celebrated green grass at Fenway Park.Ted Williams never did it. Not Carl Yastrzemski. Not Carlton Fisk. Not even Pedro Martinez and Curt Schilling, who ended The Curse nearly a decade ago but did it on the road.When the Red Sox last won a World Series at home, Babe Ruth, Carl Mays and Harry Hooper were the stars in September 1918, a season cut short by World War I. Ahead of the St. Louis Cardinals 3-2, the Red Sox have two chances to reward their faithful.“It would be awesome,” said John Lackey, who starts Game 6 on Wednesday night against Cardinals rookie Michael Wacha.Fenway was just a kid the last time the Red Sox won a title at home, a modern 6-year-old ballpark. A crowd of 15,238 watched the Red Sox defeat the Chicago Cubs 2-1 to win the Series in six games.“It was a ball game that nobody who was present will forget. It left too many lasting impressions,” Edward F. Martin wrote the following day in the Boston Globe.That was so long ago that Woodrow Wilson was president of the United States, television hadn’t been invented and the designated hitter didn’t exist. There were 16 major league teams — none west of St. Louis — all games were played in the daytime and the NFL was 23 months from formation.Now, Fenway Park is a centurion, the oldest home in the majors and listed on the National Register of Historic Places.The last time a World Series Game 6 was played between Lansdowne and Van Ness Streets was in 1975, the night Fisk sent Pat Darcy’s second pitch of the 12th inning high down the left-field line and waved his arms three times, urging the ball fair, before it clanked off the yellow foul pole atop the Green Monster.“I was just wishing and hoping,” Fisk recalled in 2005. “Maybe by doing it, you know, you ask something of somebody with a higher power. I like to think that if I didn’t wave, it would have gone foul.”Boston needed that 7-6 win to force a seventh game against Cincinnati, and the Red Sox went on to lose the following night.Now, they are one win from setting off a Boston Glee Party.“With no disrespect to history or to Carlton, you know, it’s an iconic video and a highlight that is shown repeatedly, and one of the more memorable swings that probably has taken place in this ballpark,” Red Sox manager John Farrell said Tuesday, “but hopefully there’s somebody tomorrow night that can wave their arms just the same.”Boston swept the Series in 2004 and ‘07, starting at home and winning titles at St. Louis and Colorado. Given the length of time since the last championship clincher at Fenway, there is a seemingly insatiable demand for the just over 38,000 tickets.As of Tuesday evening, the cheapest of 1,600 or so ducats for sale on Stubhub.com was for standing room on the right-field roof deck for $983.75. A dugout box seat was available for $10,894.20.“I don’t know what happened in 1918, but tomorrow we’re going to try and make it happen, make people proud and happy in the city of Boston and New England,” David Ortiz said. “I guarantee it’s going to be wild.”
Posted by LynyrdSkynyrdBand at 8:00 PM

Boston needs just one more win (either wednesday or thursday evening) at home (Fenway Park), and they're the 2013 Champions.

This will be the first time the Redsox have won a World Series AT HOME since 1918.
Fenway (and the surrounding area) will explode. LOL
(Celebration videos to follow, LOL)

In the words of David ortiz:

“I don’t know what happened in 1918, but tomorrow we’re going to try and make it happen, make people proud and happy in the city of Boston and New England. I guarantee it’s going to be wild.”

Thanx for the post Lynyrd. I've watched nearly every inning, I seen the "pick off" and the "obstruction".

I haven't posted anything here lately simply because I don't have anything to post.

Hi Lynyrd, by any chance are you a Red Sox fan?

I know you're a Bruins fan and I don't appreciate them handing my Sharks their only regulation loss so far this season.....

I'm a fan of all the Boston teams.

If the Sox win, it's gonna be absolute pandemonium. LOL!

Well not the RED SOCKS because I dont have a baseball team to root for. Just football & hockey & my teams have been sucking for a long time now. lol

Well not the RED SOCKS because I dont have a baseball team to root for. Just football & hockey & my teams have been sucking for a long time now. lol

pure joy Lynyrd. just a great story. How about Nava, finishing eighth in the league in hitting and barely getting to play. just that kind of funky upside down story. gotta love it.
Whose the most likely Family member to be watching the game tonight? I'll wager a buck on Gypsy. Most folk in Texas love bball so I'm thinkin her husband has the game on.

What's up with the beards??

Most of the Boston players have these long beards....sorry, but it looks nasty...

And their heads are bald! They remind me of TJ!

I'm still root'n for them, but geez, it makes watching them tough...

I think it is a bit of a take on Duck Dynasty, Kimchi.
Certainly not Charlie Manson.