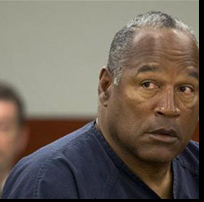 CARSON CITY, Nev. (AP) — O.J. Simpson has been granted parole on some charges stemming from his 2008 kidnapping and armed robbery convictions involving the holdup of two sports memorabilia dealers at a Las Vegas hotel room.
The Nevada Board of Parole Commissioners on Wednesday released an order approving the former NFL star's parole request.
But the order doesn't mean Simpson will be leaving Lovelock Correctional Center anytime soon. Because he was convicted on multiple charges, Simpson still faces at least four more years in prison on sentences that were ordered to run consecutively.
Simpson appeared before a two-member parole panel last Thursday to plead for leniency. He expressed regret for his actions and said he's tried to be a model inmate while behind bars.
Prison officials say he's had no disciplinary actions against him.
Posted by LynyrdSkynyrdBand at 9:00 AM

I'd let out all the Manson killers before I'd let OJ out.

I wonder if there's anything to the Glen Rogers story about the Simpson/Goldman murders.......