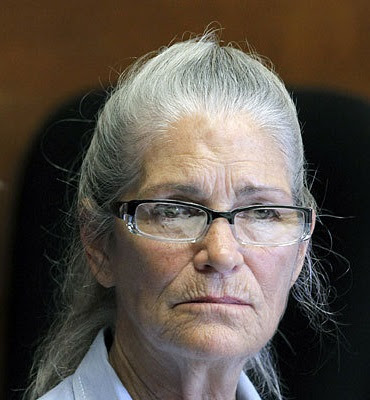 The 63-year-old was convicted of murder and conspiracy for her role in the August 1969 slayings of a wealthy Los Angeles couple, Leno and Rosemary LaBianca. They were stabbed to death the night after Manson's followers killed actress Sharon Tate and four others.

Board of Parole Hearings Commissioner Jeffrey Ferguson told Van Houten she had failed to explain how someone as intelligent and well-bred as she was could have committed the "cruel and atrocious" murders of Leno and Rosemary La Bianca. She won't be eligible to ask for parole again for five years, but Ferguson said she could request another hearing sooner if circumstances change.

"The crimes will always be a factor," he said. "The question is whether the good will ever outweigh the bad. It certainly didn't today."

With survivors of the LaBiancas sitting behind her at the California Institution for Women, Van Houten acknowledged participating in the killings ordered by Manson.

The ruling came after a full-day hearing at which six representatives of the La Bianca family spoke in anguish about the loss of the couple.

"Today after 44 years, your crimes still instill fear in innocent people," said Ferguson. "The motive was the worst I can imagine, to incite a race war. Your crimes were gruesome and bloody."

During her comments, Van Houten repeatedly said that she was traumatized by her parents' divorce when she was 14, her pregnancy soon after and her mother's insistence that she have an abortion.

"Many people have traumatic childhoods," said Ferguson. "You have failed to explain at this time what would cause you to commit such horrific atrocities."

Van Houten showed no reaction to the ruling and quickly was escorted out of the room. In her final statement, Van Houten apologized to everyone she harmed.

"I know that the pain goes on generationally. I want the victims to know I'm deeply ashamed of what I have done," she said. After years of therapy and self-examination, she said, she realizes that what she did was "like a pebble falling in a pond which affected so many people."

"Mr. and Mrs. La Bianca died the worst possible deaths a human being can," she said.

Arguing to the board, Los Angeles County Deputy District Attorney Patrick Sequiera said some crimes may be an exception to the law guaranteeing the possibility of parole.

"There are certain crimes that are so heinous, so atrocious, so horrible that it should cause denial of parole," he said, elaborating on Van Houten's contradictions over the years.

In response, Van Houten's lawyer, Michael Satris, said his client "sank to the depths of Dante's inferno and she put herself there by consorting with the devil himself, Charles Manson." However, Satris said his client has totally reformed herself.

"Leslie committed a great sin, a great crime in 1969, and in that time (in prison) she has developed into the equal of a saint," he said. "Everything she does is for humanity."

Van Houten was portrayed at trial by her defense lawyers as the youngest and least culpable of those convicted with Manson, a young woman from a good family who had been a homecoming princess and showed promise until she became involved with drugs and was recruited into Manson's murderous cult.

Van Houten has previously been commended for her work helping elderly women inmates at the California Institution for Women. She earned two college degrees while in custody.

This should come as no surprise to anyone. These people ain't gettin' out.

And for those who say they are political prisoners, I say BUNK.

They were convicted of murder one. Their murderous acts were incredibly heinous. Their acts after the murders were unthinkable.

Shall I name them?

So to anyone who thinks that ANY of the murderers are political prisoners, think about it again.

And when you think about it again, just imagine that it was YOUR loved one who was murdered by these fiends. Who later laughed about it in court, sang stupid songs, carved themselves up, made a mockery of the court.

Leslie can be as sorry as she wants to be now, but she can't make amends for her actions back then.

We all have things in our past we wish we hadn't done. But 99% of us don't have this kind of carnage that we want the general public to "forgive and forget".

It's not that convenient Horseteeth. There are some atrocities in life that CAN NOT or WILL NOT be forgotten....

HLN Network is running a series "Behind Prison Bars". It's very interesting and captivating. It shows exactly what happens when you're booked and loaded into prison. It's actually downright scary.

Nancy Grace did interviews with women in prison and it's very touching. I don't know what these gals did to end up lifers, but their comments touched me.

They wish they could just go home again.

I can't help but think that Leslie & Pat feel this way. I have to say that I do feel pity for these 2 gals. I feel that Charlie took advantage of them and they were used in a horrendous way. Not to say they couldn't have said no, but they were thrust into a time that was "colored" by a con man.

"but they were so young".

However, Satris said his client has totally reformed herself.
"Leslie committed a great sin, a great crime in 1969, and in that time (in prison) she has developed into the equal of a saint," he said. "Everything she does is for humanity."

I updated her photo to today's current courtroom pic.
She really has aged a great deal.

The look on her face, says it all.

That woman is only 4 years older than I am, yet she looks light years older.

The Parole Board gave her a five year denial.

But she'll never be a grandma because she's barren.

That Katie, is a very powerful image.

Thanks Johnny it's very intense. I'm divided on the verdict.....

These are 2 statements I've never heard her say before. This is gut-wrenching. She's actually saying she doesn't know if (1) she would not have killed a child and (2) how many people she would have eventually killed. Amazing...

Katie, those statements also gave me a chill.

You said it all in your first statement when you said, "just imagine that it was YOUR loved one who was murdered by these fiends." That's how I look at it. I'd be determined to keep them in jail.

If the name Charles Manson were not attached to her she would have been out a long time ago.

Most certainly you are right Matt.

These people on the parole board are whores for the state of California, state workers protecting their own careers, ignoring the rule of law, numb and ignorant to a noble human being who rehabilitated herself to a worthy human being. And said fuck you to any person who has tried to redeem themself.

Where you been Bro?!