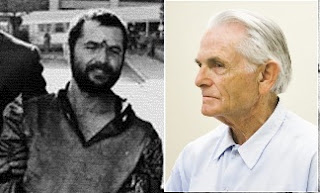 The 70-year-old Davis was convicted with Manson and another man in the killings of a musician and a stuntman. He was not involved in the infamous Sharon Tate murders.

Monday will be the end of a 120-day review period by the entire parole board. If they uphold Davis' parole recommendation, Brown then has 30 days to review the decision and either approve or reject it.

Hey Bruce you murdering fuck, good thing they were never able to pin any of your other victims on you!

How on earth can they keep Pat locked away if this piece of work gets out?

adam said...
How on earth can they keep Pat locked away if this piece of work gets out?


Because Pat is responsible for 7 murders while Bruce only got nailed on 2. That is why. Let him out hes 70 fuckin years old. He's not gonna reoffend.

I wonder if Bruce ever thinks back to when he surrendered in 1970 and is rightfully embarrassed by his goonie answers to questions and appearing to be "half-wittish".

Perhpas if the 49ers win the superbowl, the guv might be feeling good come Monday morning, no?