Whatever Happened To This Guy?

Wasn't his plan to get Manson a new trial,
because the first one wasn't fair?

February 8, 2011 6:06 a.m. EST
(CNN) -- Prominent attorney Giovanni Di Stefano, who has represented former Iraq dictator Saddam Hussein and his right-hand man, "Chemical Ali," or Ali Hassan al-Majid, is representing Charles Manson in his attempt for a new trial, Di Stefano told CNN on Monday. Di Stefano has filed an application with the Inter-American Commission on Human Rights on behalf of Manson, he said. The petition says Manson didn't receive a fair trial when he was convicted 40 years ago because, among other things, he was not allowed to represent himself, Di Stefano said. 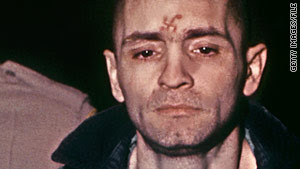 The prosecutor in the Manson case, however, said Di Stefano's claim has no merit.

Manson was assigned a public defender after the judge in his case became frustrated with Manson's behavior while he was acting as his own attorney.

Di Stefano said that was a violation of Manson's Sixth Amendment rights and is grounds for a new trial.

I read about this guy pretty closely, way back when he was current news.

My take, from what I remember:
He intentionally seeks-out the most notorious criminals he can find.
He thinks that by representing "big names"... he in-turn, will become famous himself (by association).
His list of infamous clents is substantial.

DiStefano filed an appeal with some type of human rights (anti-abuse type) committee, on Manson's behalf.

I was following the story pretty closely, until I read this information regarding DiStefano:

London-based Giovanni Di Stefano, 55, whose clients have included Saddam Hussein, Gary Glitter, Harold Shipman and Ian Brady was arrested in Spain... february 2011. A Spanish police source said Di Stefano was wanted on 18 counts of fraud, theft and money-laundering between 2004 and 2009. Most of those charges relate to the alleged defrauding of clients.

Di Stefano was close friends with Serbian warlord Željko Ražnatović, aka Arkan, before his assassination.

Di Stefano was jailed for five years for fraud in March 1986 and was banned from being a company director after trying to steal tens of thousands of pounds through cheques drawn on imaginary banks.

His appeal was dismissed in January 1987 when Lord Justice Stephen Brown concluded his trial had 'revealed a very deep and wide measure of fraudulent behaviour'.

I kinda dismissed the man as a quack, after I read that article.

Well he can't ask the "new" President to let Manson out because he already did and got laughed at.

I guess the Inter-American Commission on Human Rights blew him off too.

Manson did get a fair trial.

Last I knew, which was right after his Manson deal, he was diagnosed with cancer. That's been a few years ago.

He's obviously okay now. Here's the latest now (Take note of the last sentence)
:I’ve just had the ‘pleasure’ of watching Giovanni Di Stefano’s plea to his fellow Rangers shareholders and it leaves me with the a few burning questions.

Is this guy a Saint who will ride to the rescue of the shareholders of the now departed Rangers PLC ?
Is he a sinner who sat back for 20 years saying nothing about EBT’s and dual contracts? (he honestly may not have known about these practices but as a share holder and a clever guy he should have known at least about EBT’S)
Is he just a self serving publicity seeker ?
I think I’ll go with a combination of the last 2. Mr Di Stefano’s. Throughout his video plea he bangs on about conspiracy and shadowy men in suites trying to obliterate Rangers Football Club since that club suffered an insolvency event and obviously Craig Whyte.

However at no point in the video where he entertains us with tales of nearly saving Saddam Hussein’s life (God bless him) and men in suits in the Houses of Parliament does Mr Di Stefano even hint at the corruption that occurred at RFC.plc under the ownership if Sir David Murray.

Mr Di Stefano’s video would bring a tear to a glass eye but I suggest if he has any quibbles over losing his share investment he should be calling Sir David Murray out not Duff and Phelps. He warns of a ‘bouncing bomb’ hitting Scottish football which in fairness is consistent with the type of language being used by those desperate to save the dying RFC and also chimes nicely with the Dam busters theme the dying clubs supporters loved humming along with pre match. I believe one of his main motives for his video slips out near the end when he ‘bigs up’ Mr Charles Green.

I think Mr Di Stefano’s motives lie purely in self promotion and trying to do Charlie Green a favour.

Well I finally had a Five Guys Burger today. And I have to agree with Daym...it's the best burger I've ever had.

It comes in that ghetto grocery bag and it's wrapped in foil (in Texas it's pronounced "Folle".) It's greasy and cheesy, and scrum-diddli-umptious.

This is what bacon is supposed to be. I wish you could smell what I'm smelling. You bite the fire, the fire bites back my man. Day-um, day-um, day-um.

Charlie's "X" looks like he drilled little circles on the ends. HA HA.

Yeah...he didn't get a fair trial. And neither did Ted Bundy.

BTW, they both represented themselves.

katie
for franchise burgers, 5 Guys rule.
makes an In and Out taste like McDonalds.

Check out starting Nov 12 what the good folks over at Cielo Drive will be putting out.
The Al Springer Interview Tapes.
This should be good stuff.

From what I've gathered, this guy never even talked to Manson and talked to his friends on the outside only after he told the media his "plan". Kinda like the attorney that all us Cali tax payers paid for at Charlie's last parole hearing (he wouldn't meet with that guy).
Also.......I thought it was fairly common knowledge that Manson was not allowed to represent himself, his pro per was vacated, unlike Bundy.
This attorney seems to be as Lynyrd said, an attention whore looking to land "big" clients. I remember reading somewhere that he said he would've represented Bin Laden had they captured him alive.
But......like most in this saga......he went.....POOF!
Hope all are well, PEACE & LOVE and have a great day!!!!!

Hi Johnny. Thanks for the info about the interview tapes!

Hi Josh. Let me rephrase my statement. Charlie had the chance to represent himself, but he blew it with his stupid demands.

Yeah I agree. I don't think this attorney even talked to Manson. I guess he was just gonna try to be Charlie's "Don Quixote".

johnnyseattle said...
Check out starting Nov 12 what the good folks over at Cielo Drive will be putting out.
The Al Springer Interview Tapes.
This should be good stuff.(end quote)

Poirot replies:
Springer was a favorite witness of Bug's which I always found odd since he never met Charlie till he came to Spahn's the day after the Labianca murders and visted only three times total. I'll be interested to see what is on the interview tapes.

@JhonnySeattle, Thanx for the heads up about the Al Springer interview coming. Apparently, Mr. Springer died in 2000. Found this on another site:

"The detectives were astonished when Springer told them that a few days after the Tate murders that Manson had bragged to him about killing people: "We knocked off five of them just the other night." Springer stayed clear of Manson after that, but mentioned that Danny DeCarlo, another member of the motorcycle gang lived at the Spahn Ranch with the Family.

In the course of the interview Springer asked if anyone had their refrigerator wrote on? "Charlie said they wrote something on the fucking refrigerator in blood...Something about pigs or niggers or something like that."

When the police finally got to Danny DeCarlo, they really got an earful about Charlie and his Family. Not only did DeCarlo confirm their culpability in Gary Hinman's death, but he implicated them in the death of a 36-year-old ranch hand named Shorty, a nickname for Donald Shea. He was killed because he'd tell the owner of the Spahn Ranch what was really happening on his property. "Shorty was going to tell old man Spahn...and Charlie didn't like snitches," DeCarlo explained."

Also, apparently, CieloDrive.com has posted the transcript of the recent Bruce Davis parole hearing, I haven't read it yet, but I think that's what it is.

Finally, I checked my e-mail Lynyrd, I'll get back to you. Thanx.

hours and hours of Al Springer talking.
Bugliosi described him as an anomaly as a biker.

i can't wait to listen to it Monday night.

Bugliosi described him as an anomaly as a biker
(end quote)


Translation; Bug means he could read.

ha! i know some bikers who may take issue with that!!

seriously, Bugliosi was referring to his relatively clean cut appearance and the fact that Al Springer was known to be devoted to his wife.

ha! i know some bikers who may take issue with that!!

seriously, Bugliosi was referring to his relatively clean cut appearance and the fact that Al Springer was known to be devoted to his wife.

>>>Johnny said: seriously, Bugliosi was referring to his relatively clean cut appearance and the fact that Al Springer was known to be devoted to his wife.>>>

I'm surprised that he would even hang around with the Manson gang.

After listening to Springer over at Cielo.com I was impressed how quickly he sized up Charlie for what he really was. He quickly spotted that Charlie was a brainwasher.

Hi Lynyrd ! In regards to "Whatever Happened To This Guy?"

I have been wondering that or at least whatever happened to the effort that was started for Manson to get a new trial, so your post got my attention and I went ahead and twatted to Mr. Stefano and he is alive and doing well but has been gone from Team Manson for a couple years. Anyone feel free to read our brief exchange at this link:
https://twitter.com/briandavisradio/status/268744773093957632

He seems to have a stake in running some kind of online news publication. But definitely done with his role in the Manson story.