Seeking an End to an Execution Law They Once Championed 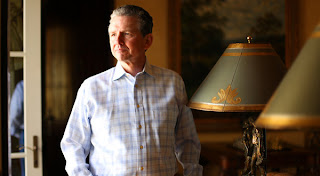 Ron Briggs, once behind a tough death penalty initiative passed in 1978, now wants it repealed.
By Adam Nagourney: April 6, 2012
PLACERVILLE, Calif. — The year was 1978, and the California ballot bristled with initiatives for everything from banning gay teachers to cracking down on indoor smoking. Both lost. But one, Proposition 7, sailed through: expanding the state’s death penalty law to make it among the toughest and most far-reaching in the country.
The campaign was run by Ron Briggs, today a farmer and Republican member of the El Dorado County Board of Supervisors. It was championed by his father, John V. Briggs, a state senator. And it was written by Donald J. Heller, a former prosecutor in the New York district attorney’s office who had moved to Sacramento.
Thirty-four years later, another initiative is going on the California ballot, this time to repeal the death penalty and replace it with mandatory life without parole. And two of its biggest advocates are Ron Briggs and Mr. Heller, who are trying to reverse what they have come to view as one of the biggest mistakes of their lives.
Partly, they changed their minds for moral reasons. But they also have a political argument to make.  “At the time, we were of the impression that it would do swift justice, that it would get the criminals and murderers through the system quickly and apply them the death penalty,” Mr. Briggs, 54, said over tea in the kitchen at his 100-acre farm in this Gold Rush town.
“But it’s not working,” he said. “My dad always says, admit the obvious. We started with 300 on death row when we did Prop 7, and we now have over 720 — and it’s cost us $4 billion. I tell my Republican friends, ‘Close your eyes for a moment. If there was a state program that was costing $185 million a year and only gave the money to lawyers and criminals, what would you do with it?’ ”
California is not the first state to reconsider the death penalty in an era of questions about its morality and effectiveness. And even with these unusual advocates — and a new argument, that the death penalty has cost the state a fortune but produced only 13 executions in 34 years — the repeal faces tough going.
This is a state with a history of colorful crimes and criminals; polls here invariably find strong support for executions.
“It’s been a colossal failure,” Mr. Heller said in his Sacramento office. “The cost of our system of capital punishment is so enormous that any benefit that could be obtained from it — and now I think there’s very little or zero benefit — is so dollar-wasteful that it serves no effective purpose.”
A Field Poll in September found a jump in the number of Californians who would favor life without parole over the death penalty for someone convicted of first-degree murder, to 48 percent last year from 37 percent in 2000. Still, over all, 68 percent said they supported the death penalty for serious crimes. The report said that keeping inmates in prison for life would cost substantially less than executing them.
“Whenever you just ask about the death penalty in and of itself, the public continues to support it,” said Mark DiCamillo, the director of the Field Poll. So the attempt to rescind it is “going up against established opinion, which is a tall order,” he said.
Kent Scheidegger, the legal director for the Criminal Justice Legal Foundation, which supports the death penalty, said cost “is probably the only argument that has any chance. The people have heard all the other arguments for years, and it has never gotten any traction.”
Mr. Briggs said his views began to change after he learned about the case of a woman who had been shot and sexually assaulted in 1981. The attacker — who also killed a woman in the assault — remains entangled in appeals, forcing the victim to continue to face him. “I just thought about the horror for her that we did,” he said. “He committed a crime in ’81. What a lousy system.”
The other factor? “I started going back to church,” said Mr. Briggs, a Roman Catholic.
When he wrote the initiative, Mr. Heller said, he gave no thought to its cost. “I am convinced now that it has never deterred anyone from committing a murder,” he said. “In my mind, I realized what I did was a big mistake.
Full Story: http://www.nytimes.com/2012/04/07/us/fighting-to-repeal-california-execution-law-they-championed.html?pagewanted=1&_r=1&emc=eta1
Submitted by Starship!  Thanks Starship!
Posted by LynyrdSkynyrdBand at 10:50 AM
Labels: Death Penalty Legislation

To support or not support the DP is a personal and philosophical position of which I would never tell someone that their postion was wrong. However, recognizing that the implementation of such a sentence is not designed to deter others, although it does deter the recipient from ever re-offending. It is designed to place the ultimate responsibility upon a person who has committed the most callous of crimes.

While the current DR population is over 700, securing a DR conviction is not common, and is difficult to achieve. California has hundreds of murders committed and hundreds of convictions secured without applying thhe DP. It is a necessary and effective punishment. However, the process in which we rely is broken. That does not mean that you abandon the application, it means you fix the process. You change how appeals are filed, and the time in which appeals are filed. You provide better counsel on appellate issues, and you provide DNA testine, where applicable, in the beginning. DNA is not the definative smoking gun in many cases, it is simply another form of evidence in which the determination of guilt can be considered.

LWOP is not a sufficient punishment for there is no punishment received for someone who continues to offend behind bars. Crime does continue, and lives are taken by those who have nothing to lose. I can think of both Clarence Ray Allen and Ronnie Dement who committed crimes while imprisoned, both received the DP as a result. They are but only an example of the need to still punish those who defy the laws established by society. They are the type who show disregard for our system and then demand protection from the very same society that they abused.

Californians may have mixed feelings about the DP from time to time, but they do not have mixed feelings when it comes to believing that LWOP means what it says. As soon as LWOP becomes te law, there will be those who will claime that LWOP is a constitutional violation and will begin seeking LWP as the only form of punishment. No one believes that our current correctional system is immune from the sometimes well-intended, yet softheaded interference from legislators and do-gooders who wish to appear, or actually be seen as compassionate. Unfortunately, those deserving the most compassion, the victims and their families, typically receive it the least....

Hi Dilligaf! Thanks for your input as a very knowledgeable guy regarding the California penal system. Much appreciated!

I think that instead of doing away with the death penalty, they should cut down on all these appeals.

I know it's expensive to do the death row thing, but how is it more expensive than providing free food, shelter, medical care and education for the rest of some monster's life who took a life and destroyed everyone connected to that life?

Is life in prison a deterrent to those insane sociopaths who just don't care? As you say, they continue their crimes even behind bars.

Look at Scott Peterson & Richard Ramirez. They were both given the death penalty, but as far as I know, they're both still living for free at the taxpayer's expense.

Why not just say "within 1 year you'll be dead" and be done with it.

You have been found guilty by a jury of your peers. I now sentence you to death. The bailiff may fire when ready.

>>>You have been found guilty by a jury of your peers. I now sentence you to death. The bailiff may fire when ready.>>>

While we'd all agree that society would be better off ridding ourselves of monstrous killers, the real problems IMO are twofold. Firstly, should we ourselves become de facto killers by ordering to death those we condemn for killing. And secondly, no system is perfect, therefore this irreversible punishment will occasionally result in the execution of the wrong person.

Here in Europe, member states are required to not practice the death penalty. The U.S. is the only western nation to practice it, and in world terms is in some very questionable company; the other states practicing it being Belarus, China, Cuba, Egypt, India, Iran, Iraq, Japan, Malaysia, Mongolia, North Korea, Pakistan, Saudi Arabia, Singapore, South Korea, Taiwan, Tonga and Vietnam.

I know it's a very emotive issue, but it's difficult to reconcile the desire for vengeful punishment with inevitable wrongful executions. By supporting the death penalty, one is signing up to knowing in advance that it will result in the execution of the occasional innocent person. That's not an easy position to take the moral high ground on. And, to me, I'm very wary of the idea of any state being given a mandate to kill its own citizens.

What you refer to as vengence is really paying the ultimate price for one's own actions. Not all murders result in the DP. If your crime is so horrific to warrant losinng your life, you made that decision. Prison's do not provide the ultimate punishment nor protection by merely holding these few inmates for life.

In re innocent people being executed, it has not been shown, post furman, that an innocent person in the U.S. has been executed. There are numerous allegations, which remain unproven, thagt it has occurred, but to date, not a single case has been proven. Simple allegations, or "surprise newly discovered evidence" has not swayed the numerous reviews by both state and federal courts. While I believe that there needs to be a revised appeals process, the system has assured society that all rights are protected up to execution, regardless of what the Innocence Project alledges.

Well I for one believe in the death penalty.

Let the punishment fit the crime.

And I'm talking about cold blooded killing...not self defense or accidental death. Those are different.

Use the Manson Family for example. Cold blooded killing of complete strangers for no reason except to "mind" their hippy cult leader.

Just as was said earlier, the victims keep suffering every time a parole hearing comes up for these creatures. The victims should just be able to live out their lives in peace. They've been hurt enough.