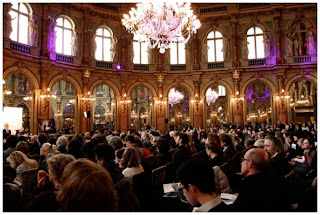 In Bouzereau’s "Roman Polanski: A Film Memoir", the exiled Chinatown director (Polanski) chats with his friend and producer Andrew Braunsberg about his career, the murder of his wife Sharon Tate, and his 2009 arrest in Switzerland following an American extradition request stemming from a 1977 rape charge.

The film premiered last September at the Zurich Film Festival where Polanski also accepted a lifetime achievement award. The film programmed in the festival’s Special Screenings section, and was unveiled at a Paris press conference (pictured above) today (April 19).
The 2012 Cannes Film Festival runs from May 16-27 in Cannes, France.
Submitted by Katie! Thanks Katie!

In Bouzereau’s "Roman Polanski: A Film Memoir", the exiled Chinatown director (Polanski) chats with his friend and producer Andrew Braunsberg about his career, the murder of his wife Sharon Tate, and his 2009 arrest in Switzerland following an American extradition request stemming from a 1977 rape charge.

I understand there will be a follow-up Q&A on his favorite Thirteen Year Olds....

Thanks, katie.
Dilligaf, that comment was worthy of a spit-take!

>>>Dill said: I understand there will be a follow-up Q&A on his favorite Thirteen Year Olds....>>>

I think he might have moved on to 14 year olds by now. LOL.

Here's a new movie that probably isn't worth a new thread, but might be interesting.

Review: "This dystopia doesn’t update Lord Of The Flies, nor does take the direction of the frighteningly cultish Martha Marcy May Marlene, despite a cast of young women that the junkie character calls ”yoga sluts” and a long luxuriant beard on yoga teacher Paul that Rasputin or Charles Manson would have envied."

Great find. Check this out oo:

Let me know what you think....

Thanks Starship! I thought of you when I first ran across this movie because it takes place in your neck of the woods.

Well, talk about pushing the reality factor. Killing 2 deer for this movie??? What was the director thinking?

"UPDATE: The Tribeca Film Festival has canceled red carpet plans for "First Winter," but that might not be connected to the DNAinfo.com report. "The festival cancels many red carpets," said the film's publicist when asked for comment."

This film may be dead before it ever lived.

No one will pay attention to a little Polish child molesting director like this dude......

Can the Flyers beat the Penquins?