Full Movie - "The Six Degrees of Helter Skelter" - 2009
This movie visits over 40 locations related to the infamous Tate/LaBianca murders, tying together the dozens of odd connections between Charles Manson and the Hollywood elite.
Entertainingly led by famous Hollywood historian Scott Michaels (FindADeath.com & DearlyDepartedTours.Com), this epic documentary employs never-before-seen autopsy reports, dozens of rare photographs, original Manson Family music recordings, and modern-day visits to the locations where the action went down, in the most complete retelling of the Manson Murders ever put on film.
Written by Michael Dorsey. 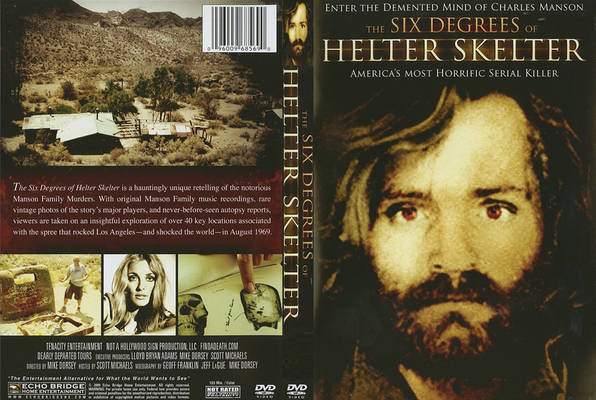 Posted by LynyrdSkynyrdBand at 11:08 AM
Labels: The Six Degrees of Helter Skelter Movie

Charlie at Whiskey a Go Go:

also BackporchJugend has a Tumblr page which you can find here:

I am soooo in love with tumblr.

At around 46:22, Scott is standing in front of Falcon Lair, home of Doris Duke. That house is mentioned in the book Restless Souls. But in the book it sounds close to Sharon's house because Patti said she walked over there.

But it looks like it's clear across the canyon from Cielo Drive. How in the world did Patti walk all the way around the canyon as a young girl that age?

Katie I totally agree about Dennis Wilson's house..it kind of looked like a rustic shack....and the Jesus/God line was hilarious..some interesting stuff indeed like Charlie offered Debbie Harry a ride??never heard that one before.

Missy I didn't get to the Debbie Harry comment yet. Either that or I just missed it with all the stopping and starting. LOL.

I've gotta stop and work on something, but I'll come back and finish watching this.

That was a great video, I watched it a couple times now.

Thank you Missy, with all do respect to Back porch as well.

Talk about six degrees, So many connections pointed out I dont even know where to start.

I guess I'll watch it again.

I've always thought there is a possibility that Suzann was involved in the Labianca murders. She knew when they would be home because they dropped her off. She decides to "forgive" Tex and none of the other murderers and rally for his release. I haven't seen her at Van Houten's or Krenwinkel's hearings. Or Charlie's either.

And I've always thought it was strange that Frank Jr. was afraid to go into the house because the blinds were drawn and the boat was still in the street.

If that was me, I'd probably think it was odd, but I wouldn't be scared. I'd probably just think that they were tired and didn't bother to put the boat up or raise the blinds.

I like it when Scott is at Barker Ranch and he says "let's write Helter Skelter on the refrigerator and misspell it.

I am loathe to disagree with Bobby or others, and also to sound like a snob, but I thought this film sucked big time. It has no historical or intellectual value whatsoever. The "star" or narrator is but an overgrown child and simpleton. This is cheap, tawdry voyeurism at its most blatant form.
Sorry, just the way I feel.

I am loathe to disagree with Bobby or others, and also to sound like a snob, but I thought this film sucked big time. It has no historical or intellectual value whatsoever. The "star" or narrator is but an overgrown child and simpleton. This is cheap, tawdry voyeurism at its most blatant form.
Sorry, just the way I feel.

but it is a nice tour to different areas in TLB history and get to view on film what it looked like at the time, or as close as we can get by now.

tis a wonderful thing, Katie, that we (meaning everyone here) can have different opinions about something and still respect each other. I honestly wanted to like this film but I guess I just see it through a teacher's eyes (14 years) and don't really see anything added to the story. Though I do admit to being amazed, as you were, at how shabby Dennis Wilson's house was. It just feels like one of those E Hollywood programs to me.

Truth be told (Leary)...
I uploaded this video today, without even watching it...
(not even a minute of it)

As an administrator...
Things are (many times) so busy... that's par-for-the-course.
I simply haven't enough time... to view everything I post... in it's entirety... to offer an accurate opinion/critique/synopsis.
Many times... I upload stuff for other people's enjoyment... without ever getting a chance to enjoy/watch it myself.
This is one of those times.

Hence, I have no opinion of the movie, one way or the other...

Hey...
It's a free Manson-related movie for the watching.
How can you go wrong? LOL

I vaguely remember Circumstance saying it wasn't earth-shattering either.

Maybe I'll give it a watch tomorrow.
Right now, I'm learning "Beast of Burden" by the Rolling Stones on my guitar. LOL

Blogs are basically in the entertainment business.
If you're not entertained by this thread... maybe the next one.

damn, Lynyrd, didn't mean to make you feel bad. I appreciate all your efforts, even the ones I don't relate to. It is often better to keep ones opinions to themselves, especially the negative ones, because folks do get a bit riled when you insult something they like (I recall a lovely date walking out of the restuarant when I said I hated Celine Dion).
But like you say, it's all good. I posted on the other thread that I thought Jesse Cook's "Closer To Madness" captured the Manson story best for me and I am sure many here will hate the song and not agree at all. To each his own.
I can honestly see why Bobby and Katie and others might love the film, it is fun in parts, but just not my cup of tea.

Don't sweat it Leary.
It's all good.
You have a right to your opinion, and honesty is the best policy...

Who knows... if I watched the movie... I may agree with you.

From what I gathered... the value of this film is more-so in showcasing the various locations, (because the guy gives guided tours of the area)... than in case-solving... or fact-telling.
But again... that's just from what I read in the description. LOL

The film may be fabulous... it may suck... I really have no idea.

I suppose, I really should watch my own videos. LOL
(But, if I watched them all... they wouldn't make it onto the blog for months) LOL

it doesnt suck but it ain't great either
its worth watching if you havent seen it before
i got it off a torrent site a year or so ago, once in a while i go through dvds to see what i can get rid of.i came to this one and brought it to the recycling bin.
at the last minute i said 'nah' and put it back with the keepers
doesnt this have the famous mama cass house in it?
and the weber house where they hosed off after the murders?
guess i'll have to watch it again sometime

It does have the Weber house and the famous Mama Cass party pad.

It's one thing to see still photos of these places, but to me, it's more interesting to see videos, because you can incorporate the sounds with the images and get a better understanding of what it was like then.

I like Scott's comment that John Phillips found a bunch of people in black in his limo, and when he told them to scram, they ran off like penguins. HA HA.

Damn...I actually bought this years ago. I think its very good by the way. Its a more watchable and more accurate portrayal of what actually happened then you'll find on the E! or the History Channel.

I wish that guy Scott Michaels would offer me a job. I just might give it all up and move out there and dedicate my life to this sort of thing.

I agree..this is a great film. Very entertaining and I felt it was a good source for information.

I'd definitely take the tour if I was out in LA!!!

Thanks for your input Straship!

Lynyrd...I be emailin you soon once I finish Restless Souls...with my deep thoughts about it of course, and also, Ringo is playing at Bethel Woods in June. Any interest?