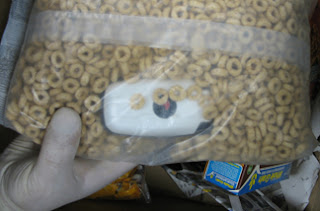 In most states, if you smuggle a cell phone into a prison, you could end up serving time behind bars yourself.   But California has no law to keep contraband cell phones from inmates.  "We've found cell phones in walls, put down inside of walls, inside of toilets, in peanut butter, in garlic," said Subia.  According to Subia, prison staff confiscated 11,000 cell phones from inmates last year. Prison visitors, young and old, smuggled them in. So did prison workers.  "We had an officer that we stopped in one of our northern California prisons who said he made $100,000 in one year for bringing in cell phones," said Rubia.
The Department of Corrections fires staff that smuggle cell phones. But the Attorney General can't prosecute them or the inmates who use the phones unless a phone was used to commit a crime. State Senator Alex Padilla says that is "not good enough."  The San Fernando Valley Democrat authored a bill to make it a misdemeanor to smuggle cell phones into prison.  Anyone convicted would get six months in jail and up to a $5,000 fine per phone. Padilla's bill would also extend the sentences of inmates found with contraband phones. But doing that is costly, which is why the Senate Appropriations Committee shelved the measure.  The Department of Finance estimates longer sentences cost up to $50,000 more per year, per inmate.  The Senate Appropriations Committee put Padilla's bill "on suspense," which is a kind of legislative backwater for more costly bills.  The committee will reconsider those bills on a single day in May.  Most bills on suspense, die in committee.  Full story here:  http://www.californiareport.org/archive/R201104270850/b
Posted by LynyrdSkynyrdBand at 2:32 AM
Labels: Cell phones in prison

Speaking of telephones, I've always thought it was funny that there was a phone at the ranch. I guess it makes sense, but a phone line in the middle of nowhere?

Why would Charlie even need a phone? Isn't he one with the cosmic universe. HA HA.

I can just hear the phone ringing at Spahn Ranch.

"You're always hogging the phone. Can't I have some phone time?"

Getting 20 teen-age girls to live with one phone, is a feat of mythical proportions, in and of itself!

If anyone doesn't think Charlie was in control... there's your proof-positive right there.

I seriously doubt anyone else, has ever accomplished that feat with 20 girls... before or since! LOL

I'm not sure how I feel about this whole "cell phone law" issue.

I have a feeling, inmates can control things on the outside, without a cell phone, if they have that kind of influence in the first place.

Incarcerated Mafiosos, have found ways to conduct business, outside the prison walls for years... before cell phones even existed.

I'd venture to guess, most of these guys/gals, are just contacting family and friends.

Although...
if this law prevents just one violent crime (that would otherwise not have happened) maybe it's valid.

Also... cell phones are basically computers now, capable of navigating the internet... which opens a whole new argument.
These devices are no longer phones, but computers, for all intents-and-purposes.

This issue seems all but dead (in California) anyway, due to budget constraints... but, it's a valid concern... and one which will surely arise again, eventually.

It's my understanding, that California is in the minority on this issue.
Most states do have laws, regarding cell phones in prison.

Let 'em wait in line for the pay phone or wait until "visting day" and see if anybody shows up.

They shouldn't have any luxuries at all. It's prison...not a resort.